We achieved all we wanted to do this week. We won the competition. Kinda sad that we aren't doing tug-of-war anymore. But there is a new competition we have to get started with. Jeret and I have some good ideas for the shooter and ball intake. This competition is going to be a little more intense and the whole robot is due in 6 weeks. We are teaming up with another Vex team and our chances are pretty good at winning.

One final picture of the robot. Plus a look at our rubber band wheels. 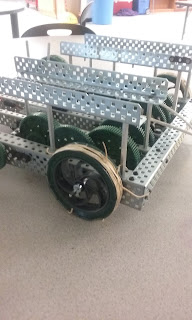 Posted by William Carlson at 9:13 AM No comments:

We are the Champions

We won the competition for the tables inside. Using a unique weight strategy and rubber bands on the wheels we were able to come back from the losers bracket. 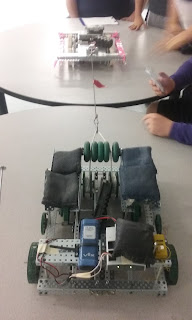 Posted by William Carlson at 9:05 AM No comments:

This week is the table top competition. I am not exited about this at all. The tables have no traction and are super smooth. Jeret and I forgot to get some tape for the wheels so we need to do that before the first match. We believe the tape will stick to the table and keep our robot stationary. The wheels will have enough torque to move the tape but the other teams won't.
Posted by William Carlson at 1:56 PM No comments:

We are really disappointed. We didn't even make it into the final match. We went up against Brandon's Tetrix robot which beat us by half and inch. Their robot did a wheelie and when the motors stopped they slid forward. That put us in the elimination bracket and we were then beat by another team in the semi-finals.

The main problem we experienced was traction. The loss of traction caused our robot to pull ourselves toward the other robot. The winch is also really slow compared to the other robots gearing. At times they would accelerate faster and pull the slack in the line to their side.

Going to regroup and try to win the next competition.
Posted by William Carlson at 1:53 PM No comments:

This is what happens when Engineering students get bored

We got bored with just pulling each other around on the tables. So we decided to make our robot hang off the edge and pull itself up. This is a picture of us trying to push Brandon's robot off the table. 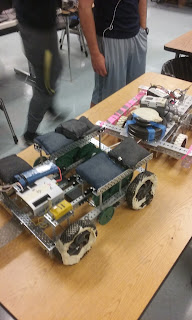 Posted by William Carlson at 2:08 PM No comments:

This week is the Tug-Of-War competition and I can feel it. There are only three teams that we have to worry about losing to but we have the most torque out of all the robots in the class. The only major concern is how our robot is going to do on the tables inside due to the smoother surfaces.
Posted by William Carlson at 12:34 PM No comments:

We are finally done with our robot. There really wasn't anything to do besides look at our amazing robot.
We did some trial runs with other teams and we won all the outside competitions. However inside we had problems with traction resulting in a few losses.
We are trying to think of ideas for better traction but nothing has come to mind.

Here are some of the robots we will be competing against 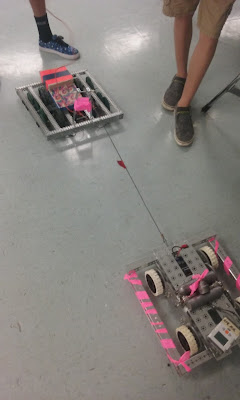 Posted by William Carlson at 12:31 PM No comments: